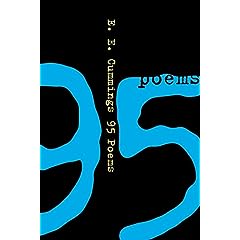 if up's the word;and a world grows greener
minute by second and most by more-
if death is the loser and life is the winner
(and beggars are rich but misers are poor)
-let's touch the sky:
with a to and a fro
(and a here there where)and away we go

it's brains without hearts have set saint against sinner;
put gain over gladness and joy under care-
let's do as an earth which can never do wrong does
(minute by second and most by more)
-let's touch the sky:
with a strange(and a true)
and a climbing fall into far near blue

if beggars are rich(and a robin will sing his
robin a song)but misers are poor-
let's love until noone could quite be(and young is
the year,dear)as living as i'm and as you're
-let's touch the sky:
with a you and a me
and an every(who's any who's some)one who's we
Posted by Calyx Ann at 11:22 PM

or maybe I should say:

I had memorized this poem 40 years ago. Recently, I tried to recall it and some lines were missing from my mind. I have been unable to find a copy of it anywhere--not in any of the ee cummings books in the library, nor on line.

It is such a joy to be able to recite the entire poem again. My favorite time to say it is in my front yard, on breezy summer day, under the 60 year old birch trees. the birch branches hang down like streamers, the clouds flit past high above. I can feel the ends of the branches gently brush my face. Sometimes, I feel a find a cold, wet nose obscuring my view, immediately followed by a sweet doggies kiss. I guess when on is lying on the grass. one is fair game for the pups!

thank you so much for posting this!!

and Wali, Thelma, Louise, Roscoe, L.K., Ruby, Sasha, Harry and the chickens (Twisty who is our litte pet, Rich the rooster, Cookies the auxilliary rooster, Martia the grey martian hen with blue skin, and Dusty, the smart Auricana.s

thank you. i shared this poem by heart with lois 26 years ago yesterday when i asked her to marry me, again during our wedding and for many many years thereafter on valentine's (engagement) day and our aug14 wedding anniversary day. she often writes let's touch the sky on cards to me and had it engraved on a gift last summer for our 25th anniversary.

as an idealistic teen nearly 40 years ago, i came to love 95 poems, particularly the bookend opening and closing poems of autumn loneliness and spring hope.

each feb14 and aug14, when up's the word and a world grows greener, i turn to this wisdom no knowledge can kill. When young is the year, dear, and a robin will sing his robin a song,
-let's touch the sky:
with a to and a fro
(and a here there where)and away we go

I too memorized this poem. and the phrase "in even the laziest cresture among us a wisdom no knowledge can kill is astir..." was the forgotten line. thank you THANK YOU

there are so many funny videos on the internet to watch, i can laugh all day watching funny videos“ Happy Rose Day Images